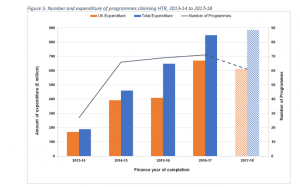 In total, HTR was paid to 180 claims, with each show able to make several claims during the production process.The government said that the 60 shows accounted for UK expenditure of £612 million (€685 million).

Since HTR was introduced in 2013, some 310 programmes – including BBC drama the Peaky Blinders – have made claims, accounting for £2.4 billion of UK expenditure and £3.2 billion of total expenditure, said the government. This resulted in 535 individual claims and a total of £563 million being paid out.

Separately, there were 15 children’s television programmes completed in the UK in 2017-18 that claimed Children’s Television Tax Relief (CTR), with UK expenditure of £24 million.

In the past year, £13 million of CTR was paid to 50 claims. A total of £18 million has been paid out in response to 85 claims for CTR since the introduction of the relief in April 2015.

High-end television, as defined by the government, is programming that costs £1 million per hour to produce on average and has a slot length that is greater than 30-minutes. HTR was announced in 2012 and introduced on April 1, 2013.

HTR allows qualifying companies to claim a deduction in their taxable profits or, where that deduction results in a loss, to surrender the tax relief for a payable tax credit.