Netflix and Amazon are building their presence in local markets with a growing amount of their original content produced outside the US, according to IHS Markit. 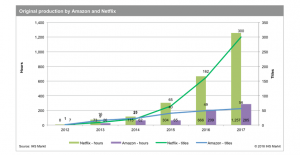 The research firm said that Netflix launched 1,257 hours of original first-run content last year, 402 hours of which – some 32% – originated outside the US.

Amazon produced far less original content for its Prime Video service than Netflix did in 2017 at 285 hours. However, by IHS’s estimates, 40% of this was original first-run international content.

“Netflix and Amazon have cast a wide net, in terms of program genres, commissioning dramas and comedies, children’s live action and animation, documentaries and rights to theatrical movies. Both companies have also dabbled in reality TV, and they are expected to move further into this area in the future,” said Tim Westcott, director of research and analysis, channels and programming, IHS Markit.

“In the linear TV era, channels produced programming primarily for domestic consumption, with international sales an often lucrative — but definitely secondary —revenue stream. The time-lag between US and international release also encouraged piracy of hit shows, like HBO’s Game of Thrones.

“Now, both Amazon and Netflix are originating programming in order to capture a global audience, releasing their originals on the same day and date in multiple territories. This also means that non-US programming has the potential to find an audience in the world’s largest entertainment market — one where subtitled or dubbed programming has been almost unheard-of outside the art-house cinema circuit.”

Speaking on Netflix’s Q2 earnings call this week, Netflix chief content officer Ted Sarandos highlighted the importance of producing “shows that “are incredibly relevant in their home territories and the nice windfall is they get viewed all over the world”, citing the example of Indian series Sacred Games, forthcoming new seasons of Spain’s Las Chicas del Cable and Mexico’s Ingobernable, forthcoming Spanish original Elite and Indian original Ghoul.

Sarandos and other Netflix executives highlighted the prospects for growth in India in particular, with chief product officer Greg Peters saying that the streaming outfit had “a lot of room to growth in a a reasonably affluent part of the society in India and other markets around the world”.