The Handmaid’s Tale was the most in-demand digital original in western Europe for the week ending July 15, according to Parrot Analytics.

According to Parrot, the show, which was created for Hulu in the US but is distributed by multiple video service providers and broadcasters internationally, scored an average of 4.612 demand expressions per 100 capita for the week between July 9-15, beating Netflix’s Orange is the New Black, which scored an average of 3.404.

Parrot Analytics analyses the demand for recent popular digital titles across international markets, based on the application of artificial intelligence to 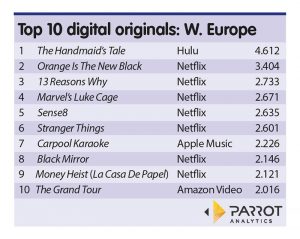 Carpool Karaoke, which was commissioned by Apple Music – the show is aired on Sky One and Now TV in the UK – came in at number seven with 2.226 average demand expressions per 100 capita, while the only other non-Netflix title in the list – Amazon’s The Grand Tour – slipped in at number 10 with an average of 2.016.

Netflix’s 13 Reasons Why took the number three slot with an average of 2.733, and the other titles in the Parrot list for western Europe for last week were all Netflix originals: Marvel’s Luke Cage, Sense8, Stranger Things, Black Mirror and Spanish-language original La Casa de Papel (Money Heist), which took the number nine slot with an average of 2.121 demand expressions per 100 capita.