eMarketer: 10% of the world’s population to use SVOD this year

Nearly 765 million people globally – 10.2% of the world’s population – will use a subscription over-the-top video service at least once per month this year, according to eMarketer. 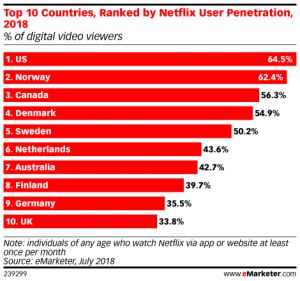 The research firm said that this represents some 32.1% of the world’s digital video viewers, with the subscription OTT market tipped to grow by 24.0% this year thanks to a broader shift toward internet entertainment.

eMarketer expects nearly 13% of US households to ‘cut the cord’ this year – moving away from traditional pay TV services in favour of paid OTT subscriptions. However, it said this a “non-issue” in Europe and Asia-Pacific where pay TV services are considered to be more affordable.

Netflix’s share of users among OTT video service subscribers worldwide will total nearly 44% this year, with the US, Norway, Canada, Denmark and Sweden ranked first to fifth in terms of top five countries by Netflix user penetration.

Netflix’s home market of the US will account for 44.4% of its global audience this year, according to the research.

eMarketer said that since the majority of Netlix’s content is in English, it has success in countries where English is widely spoken. It is also particularly popular in the Nordics, as these are advanced OTT markets with a high concentration of broadband access.

“Plans to beef up local content and deals with telcos to include Netflix in unlimited streaming packages will help growth remain strong for the next two years. Amazon Prime Video, which extended its offering to many international markets in late 2016, will also be a strong competitor for Netflix in the coming years.”