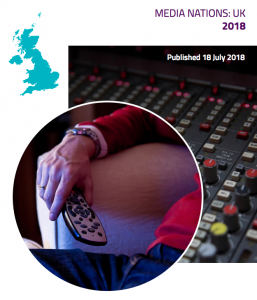 According to the Media Nations report, subscriptions to the leading OTT services – Netflix, Amazon and Sky’s Now TV – reached 15.4 million in the first quarter of this year, exceeding the total for pay TV – 15.1 million – for the first time.

However, 71% of those with an SVOD subscription also took a traditional pay TV service in Q1 2018, down only one percentage point on the figure for Q1 2017. The report found that ‘cord shaving’ is more prevalent than cord-cutting, with 36% of SVOD subscribers cutting down their pay TV spend, compared with 14% who have cut the cord altogether.

Pay TV revenues slipped by 2.7% after years of growth last year, while spending on streaming subscriptions grew by 28%. Television advertising income dropped by 7% to £3.9 billion (€4.4 billion).

The Ofcom report found that spending by the UK’s four main broadcasters on UK-made programming fell to a record low of £2.5 billion last year, 28% less than the 2004 peak of £3.4 billion. Genres including children’s programming – down 18% last year – UK comedy – down 5% since 2016, and first-run drama – down 7%, were disproportionally hit.

Increased funding from third parties for programmes made by the BBC, Channel 4 and Channel 5 grew to £338 million – up from £147 million 10 years ago – to partly mitigate the decline. This included co-production funding, deficit funding and tax credits.

The Ofcom report also found that the amount of time spent by UK viewers watching broadcast television on the TV set has continued to decline and, in 2017, stood at an average of 3 hours 22 minutes a day, down nine minutes on 2016, and 38 minutes since 2012.

Among children and viewers aged 16-34, the decline was steeper, leading to the over-65s watching four times as much broadcast television as children in 2017.

Despite the decline in broadcast viewing, the Ofcom report found that confidence in public service broadcasting remains high. Of those who watch public service channels, 75% say they are satisfied, and 84% of people considered trusted news to be the most important feature of their output.

Netflix is the most popular SVOD service in the UK, taken by 9.1 million homes, up 32.7% in a year. Amazon Prime grew strongly however, increasing its base by 32.7% to 4.8 million. Some 11.1 million homes have at least one of Netflix, Amazon or Now TV.

Paid SVOD is now catching up on free catch-up on-demand TV. Some 28% of people now claim to use Netflix, compared with 33% who use BBC iPlayer, while 12% claim to use Amazon Prime Video, compared with 16% who use ITV Hub. Some 17% of adults also use YouTube to watch TV or films online.

Two thirds of all VOD viewing last year was via a TV set. Some 44% reported having a smart TV, with 83% of those being connected to home broadband services. Some 20% use a game console to connect their TV to the internet. TV dongles and streaming boxes are now used by 11% of households to view VOD, up from 5% in 2016.

“Today’s research finds that what we watch and how we watch it are changing rapidly, which has profound implications for UK television,” said Ofcom CEO Sharon White.

“We have seen a decline in revenues for pay TV, a fall in spending on new programmes by our public service broadcasters, and the growth of global video streaming giants. These challenges cannot be underestimated. But UK broadcasters have a history of adapting to change. By making the best British programmes and working together to reach people who are turning away from TV, our broadcasters can compete in the digital age.”