Emerging markets SVOD service Iflix claims to have passed the 15 million subscriber mark after growing its service by 250% since January. 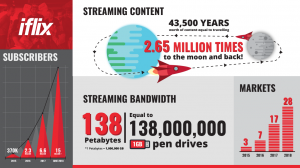 Announcing the figure, the company said that the first half of 2018 has been a period of “significant change” for Iflix with content consumption doubling in the past five months.

In total Iflix said that 22.84 billion minutes (43,500 years) of content have been streamed on its service since launch, with the service now focusing on more localised programming and features.

Iflix said it has “significantly increased” its acquisition and commissioning of local content and aims to quadruple its commissioning slate by 2019 with 12 original television series, 30 feature movies and 75 short-form films.

It claims to have also doubled its efforts and resources for translation and subtitling to help make its international content library more accessible to local audiences.

Iflix co-founder and group CEO, Mark Britt described 2018 as “already a transformational year” for the company: “We continue to be passionately obsessed with what emerging markets customers need and want. The huge growth we’ve seen across the business is a testament to that commitment.

“We have one goal and that is to make Iflix ubiquitous across emerging markets. To achieve this, we will continue to learn and innovate to build global culture and find new audiences for extraordinary world class content.”

The comments comes after Iflix in the past week launched what it described as ‘Iflix 3.0,’ which includes four newly defined content pillars – free, kids, news and originals.

“Iflix 3.0 offers customers more than 40,000 hours of cinematic quality, culturally rich, engaging and relevant content from 600 studios and content creators over a broad range of genres, as well as 40 free-to-air (FTA) channels,” said Iflix in a statement.

“The company is on track to reach 80 FTA channels by the end of 2018, of which more than 60 will be available to users for free.”

On the content front, the subscription video-on-demand service launched a live football joint venture with Football Malaysia in January, which the company said resulted in an 80% boost in activations following the announcement.

Since then, the company has added Bangladesh cricket, Formula E racing, and more recently has aired coverage of World Cup football from Russia – including streams of every match on its Kwesé-Iflix service across Africa.

Iflix said its dedicated short form creative hub, Studio2:15, is on track to produce an estimated 2,000 pieces of original short-form content by the end of the year, with a projected 250 new titles by the end of 2019.