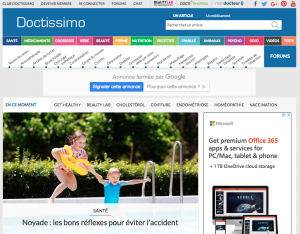 TF1 Group has entered into exclusive negotiations with Lagardère Group to take control of the latter’s online health portal Doctissimo.

The health and wellbeing site, which was created in 2000 and acquired by Lagardère in 2008, focuses on health, nutrition and the family.

Doctissimo, which is present in France, Spain and Italy, had an audience of 12 million unique visitors last year, according to Médiamétrie, and 40 million visits a month, according to AT Internet.

TF1 said that a further announcement would be made if negotiations fail to reach an agreement. In the case of talks being successful, the deal will be subject to consideration by employees in line with French legislation.

Lagardère has meanwhile announced the sale of its other e-health portal, MonDocteur, to Doctolib, allowing the latter to consolidate its position as the e-health leader in Europe.

Lagardère said it was ready to sell all of its e-health activities on the basis of an enterprise value of €100 million.