Parks: one in 10 US broadbands homes watch eSports

One in ten US broadband homes tunes into eSports, while 62% spend at least one hour per week playing video games, according to Parks Associates. 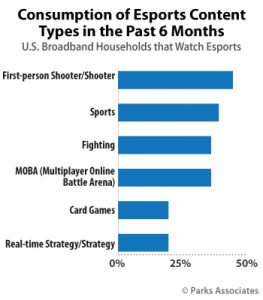 According to the research firm’s ‘Digital Natives: The Rise of eSports’ report, YouTube and Twitch are the two most popular sites used to watch eSports and are watched by 61% and 45% of viewers respectively, with more than half of eSports viewers claiming to use more than one platform.

Computers were the most popular device category used to watch eSports. Some 67% of viewers said they use computers to watch eSports, followed by 45% who use TVs and 34% who use smartphones.

eSports viewers spend more than twice as much money per month on non-pay TV video entertainment content than non-viewers, with a monthly average spend of US$47.23 compared to US$22.97, according to the report.

“eSports is a young, dynamic, and fast-growing industry. While viewership of many traditional sports is waning, eSports is well positioned to capture the attention of a generation that grew up playing video games,” said Parks Associates research analyst, Hunter Sappington.

“eSports is currently a niche market, but it has the ability to engage often hard-to-reach demographics. For distributors, including pay TV providers, OTT services, and social media platforms, eSports represents an opportunity to complement existing content and grow the viewing audience.”