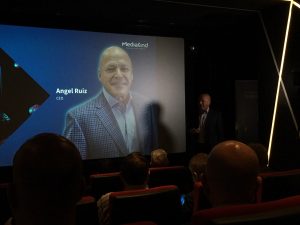 The media technology outfit is currently undergoing a ‘carve out’ process that will see Ericsson divest a 51% majority stake in it to private-equity outfit One Equity Partners, a move that executives now expect to be completed in Q3.

Bhikshesvaran said that the MediaKind brand reflected the company’s DNA. “We took a lot of input from our employee base. We asked them if we were an automobile what should we be. The answer was a hybrid and Media and Kind coming together is also kind of a hybrid,” he said.

MediaKind CEO Angel Ruiz said that Ericsson had decided to carve out its media business some 16 months ago. “This history of our new company goes back some 12 years when Tandberg Television was acquired by Ericsson,” he said.

Ruiz said that the new company would operate in “a very competitive space” and would require R&D investment to prosper through innovation.

Ruiz said that Ericsson had spent US$3 billion on the portfolio of assets that are going into MediaKind. He said that the new company had “a gold presence” in the market with some 900 customers today.

“We have a combination of media and mobility that I don’t think anyone else in the market has today,” said Ruiz, adding that Ericsson’s legacy in mobile telecoms would continue to be an important asset for the company going forwards.

“With media today being very heavily entertainment based, just think about the number of mobile devices that are out there,” he said, outlining a vision where people could consume entertainment seamlessly on the move and shifting from screen to screen as they enter their homes.

MediaKind’s management team will include Gowton Achaibar as COO and head of R&D. Achaibar has strong mobility experience, said Ruiz.

Mark Russell will serve as CTO.

Bhikshesvaran, also with strong mobility experience, will head up marketing.

Sales will be led by Ken Yap in South-East Asia, Alex Borland in EMEA, Clayton Cruz in Latin America and Steve Payn in North America. Svven Bolthausen will have the role of SVP, commercial management and sales support, and Heather Andrade-Neumann will be in charge of human resources.

Bhikshesvaran said that MediaKind counts nine out of ten global telecom operators, cable operators and satellite operators and eight out of the top 10 media and broadcast companies, as customers.

Companies acquired by Ericsson that have gone in to make up the new outfit include Tandberg Television, HyCGRoup, Fabrix, Microsoft Mediaroom, Envivio, Azuki and Aspex.

Bhikshesvaran said the company would look at adjacent markets to entertainment such as smart cities and the Internet of Things for growth.

Ruiz said that city officials all over the world are interested in how video is going to help deliver the smart city and smart services of the future. “From our perspective, being media and video focused means being entertainment focused. But when you talk about where video is in 2025, the amount of video that will not be entertainment but will be about safety and security and city administration will be phenomenal,” he said.

Platforms like Ericsson’s video storage and processing along with analytics will be central to delivering this, he said.

On Ericsson’s own strategy, Ruiz said that there is an intersection between mobile and video and it makes sense for Ericsson to continue to hold a 49% stake. However, he said that when Ericsson’s new management started to look at the investments it had made in video, executives had been concerned about the fragmentation of the market, particularly in segments such as video compression and processing.

He alluded to the fact that One Equity Partners has done a number of acquisitions, is a long-term investor, and suggested that it would be in a good place to drive this consolidation.

Within its entertainment market, Ruiz said that MediaKind remained focused on MediaFirst, its flagship platform both for OTT TV and traditional pay TV.

Borland meanwhile said that “OTT is a very big part of our future”, adding that MediaFirst would be “very focused on the OTT space going forwards”.

Commenting on the rebrand, Paolo Pescatore, technology, media and telecoms analyst, said: “Finally, the unit can get on it with business. This represents a new start and it must deliver. No more second chances. Arguably, the unit should be well placed to exploit the opportunities in convergence underpinned by the growing demand of video usage. The equity firm can ensure a commercially minded focus, while it can still rely on Ericsson’s vast technical expertise and huge connections to thrive.

“There will be obstacles that it still needs to overcome. In particular regaining trust among existing and new customers. The new brand and future plans will go some way to restore confidence and rebuild credibility with the burgeoning media and telco industries.”