CuriosityStream moves into VR and 360° video

CuriosityStream, the SVOD service launched by Discovery founder John Hendricks, has made its first steps into virtual reality and 360° video content. 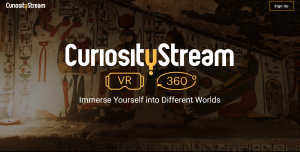 The company is premiering Nefertari: Journey to Eternity, an immersive VR exploration of an Egyptian tomb, which is available now for the HTC Vive.

Alongside this it has launched five 360° videos produced on the same Egyptian shoot on the CuriosityStream website, which it described as the centrepiece of CuriosityStream’s new 360° collection.

“The capture of Nefertari’s tomb proves there are no boundaries in the effort to digitally preserve and explore our world’s most stunning cultural artifacts,” said Clint Stinchcomb, president and CEO of CuriosityStream.

“Another of our goals is to push the envelope in visual quality for VR to show the potential to transform interactive education. This experience truly elevates CuriosityStream’s mission to satisfy curiosity using new technologies.”

Jorge Franzini, executive producer for CuriosityStream, added: “As virtual reality and 360° technologies continue to improve and become more readily available, these tools will have the power to transcend today’s production capabilities and transport audiences to places that we once thought unimaginable.

“It’s still in the early days, but innovative filmmakers have the capacity to harness these technologies and forge a path to a new way of storytelling.”