Facebook signs up with Golden Boy for boxing on Watch

Facebook has signed a deal with boxing promoter Golden Boy Promotions to bring live boxing and other original programming to its Facebook Watch platform. 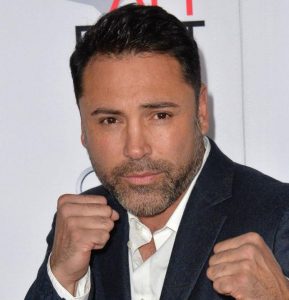 The first of five live fight nights on Facebook will kick off on August 11 with the WBA World Featherweight bout between Jesus Rojas and Joseph JoJo Diaz Jr at the Avalon Theatre in Hollywood. This will be followed by a light heavyweight fight featuring Sullivan Barrera and a yet-to-be-named opponent at the Sands Casino Resort in Bethlehem, Pennsylvania.

Golden Boy Media and Entertainment will serve as the production entity producing the live fights and original programming. Chairman and CEO Oscar De La Hoya will serve as executive producer

Live broadcasts will incorporate the real-time fan interaction and engagement made possible by Facebook’s social video platform. The live boxing series will also be bolstered with complementary programming, including rebroadcasts of past fights featuring commentary from the boxers themselves. This programming will feature major celebrities, prominent influencers, and top-tier boxing authorities from print, TV and the internet. The debut episode of this content will be on July 13, with details to be announced.

This blueprint follows Golden Boy’s charter to produce live and original programming for its distribution partners and its owned operated channels such as CaneloGGG.com, GoldenBoyPPV.com, ESPN, and RingTV.com, the company said.

Golden Boy has partnered with Kathy Duva’s Main Events to bolster the number of world-class fighters to be featured and ensure that audiences are treated with the best matchups possible, Golden Boy said.

“This game-changing deal for the sport of boxing places Golden Boy Promotions and its stable of fighters at the intersection of live sports mega-casting and ultimate fan engagement. Our team is now positioned to present world-class boxing from Silicon Valley, to Madison Avenue, to Hollywood and to the rest of the world. The reach of Facebook is just incredible, and our sponsorship conversations will truly resonate with brands across all categories,” said De La Hoya.

“We’re thrilled to team with Golden Boy Promotions to make Facebook a home for championship-caliber boxing this year. Through this unique partnership, a global community of sports fans will have free access to some of boxing’s most exciting live bouts and be able to interact with the action like never before,” said Devi Mahadevia, North America live sports programming lead at Facebook.

Main Events CEO Kathy Duva, said: “Main Events has a rich history in this sport; boxing is in our DNA. For too long, promotional companies have been at odds over a limited number of television dates. We look now to a future with Facebook with unlimited opportunity, where promoters can work together to best serve the interests of the fighters and fans all over the world.”