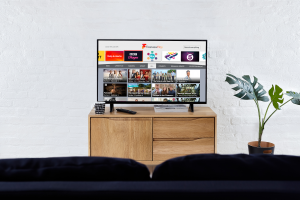 Freeview is the only major UK broadcast platform that is growing its user base, according to digital-terrestrial TV strategy and development organisation Digital UK.

Jonathan Thompson, CEO of Digital UK, said that Freeview was continuing to grow in the face of shrinking or flat satellite and cabel uptake. According to Digital UK’s annual report, the number of homes watching a Freeview-based service – including Freeview Play and YouView – on their main set had grown by over 7% since 2016 from 10.7 to 11.5 million homes.

Digital UK said that while digital-terrestrial was growing, Sky as a broadcast platform had declined by 4.3% year-on-year to 9.1 million subscribers at the end of Q1. Virgin Media’s cable platform was flat on 4.1 million, while free-to-view satellite had also declined.

Digital UK said that hybrid platform Freeview Play is on track to pass four million sales in 2018 with a new five-year £125m funding deal to enable further development, including the recent launch of a Freeview mobile app.

Speaking at an event in London yesterday evening organised by device manufacturer and software specialist Netgem, Thompson said that Freeview was keen to encourage innovation from partners as well as developing new features for Freeview Play itself.

He said that the hybrid digital-terrestrial and IP platform would introduice live restart of shows over IP later this year.

“We want a platform that is fully hybrid and synchronized with second-screen apps,” said Thompson.

Other innovations in the pipeline include IP content insertion directly into DTT streams, including the development of targeted advertising.

Thompson said the ultimate goal was to develop Freeview Play as a fully personalised service that taps into the use of rich consumer data.