The European pay TV market grew by 0.3% quarter-over-quarter in Q1 2018, the “lowest net add ever observed” by research firm Dataxis. 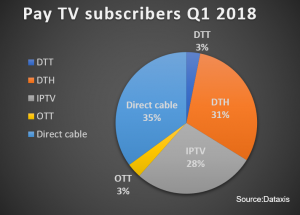 “Direct cable is still the most used technology in Europe and represents almost 65 million subscribers, including 42 million for only digital cable, but decreased slightly in Q1 2018,” according to the research, which claimed that Liberty Global and Vodafone accounted for 31% of the subscribers.

The digital terrestrial TV (DTT) market remained stable in Q1 2018, losing only 0.35% of its subscribers, according to the research.

Meanwhile, the European IPTV grew 2.0% quarter-over-quarter after adding one million subscribers. Orange in France and Rostelecom in Russia were found to account for 10% and 13% respectively of the IPTV subscribers.

Finally over-the-top TV “grew significantly”, despite only representing 3% of the pay TV market. Subscriber numbers in this segment were reportedly up 47% quarter-over-quarter.