Russian internet company Mail.Ru is in the final stages of preparing the launch of what it says will be the CIS region’s first professional eSports league, with the first season scheduled to launch this autumn. 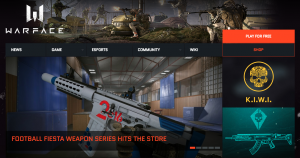 The latest competition, the Warface Open Cup, drew to a close yesterday in Minsk the capital of Belarus. According to Mail,Ru, the tournament saw the eight top eSprots teams from Europe and the CIS countries competing for a prize fund worth RUB5 million.

Mail.Ru originally announced that it would be creating the Professional eSports league last November. The company said that the league is the first platform in Russia with a unified and transparent set of rules for players, coaches, clubs, sponsors and advertisers. Mail.Ru group is responsible for regulating the league and will provide services and technology as well as marketing and communications help.

MailRu claims to be Russia’s largest publisher of client-based massively multiplayer online games. The company has organised a number of eSports competitions featureing its own games as well as regulator broadcasts of international eSports tournaments.

“It is still common for large companies and society as a whole to remain sceptical towards the rapidly growth of eSports. We are confident that our Pro eSports League will change both the industry’s image and its perception in Russia.”