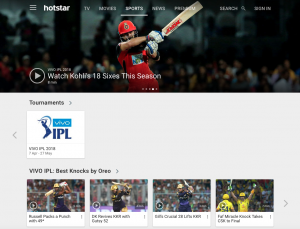 On May 22 Hotstar streamed the first qualifier match of this season’s Vivo Indian Premier league cricket between Sunrisers Hyderabad and Chennai Super Kings, with 8.26 million peak concurrent viewers tuning in simultaneously. Over four hours, more than 26 million viewers tuned into Hotstar to watch the match.

The previous record for concurrent streams is believed to have been established by YouTube when Felix Baumgartner’s space jump in 2012 saw a peak of just over eight million concurrent viewers tuning in to watch the event.

Last year recorded a peak concurrency of 4.8 million simultaneous viewers during the India-Pakistan ICC Champions’ Trophy final cricket match, the highest in the APAC at that time.

The opening week of Vivo IPL 2018 broke this record with 5.5 million concurrency recorded on April, 10 followed by a peak of 7.1 million on April 25.

The Vivo IPL 2018 tournament, now in its final week, ends this Sunday. This is the fifth year that Hotstar has streamed the tournament. The current edition of the tournament has included features such as Watch’NPlay, a skill-based game that tests cricket fans’ knowledge as they watch, virtual reality and feeds available in eight languages.

Ajit Mohan, CEO, Hotstar said: “Four years ago, when we started streaming IPL, eight million viewers would have been a big deal for the whole tournament. Crossing eight million simultaneous users is a testimony to the power of Vivo IPL and evidence of the abiding passion of cricket fans. It is not just about the scale, however. It is about reinventing the sports experience online and constantly raising the bar. Our objective is to create the future of social TV. And we are proud that the tech that we are building is expanding the frontiers of online video.”

Parimal Pandya, vice president, media, APJ, Akamai Technologies, said: “Over the past year and a half, Hotstar has broken several online viewing records at the regional level. A contributing factor was technology from Akamai playing a role in bringing down the latency drastically so users can enjoy the live action almost as well as people watching it on their television. This is a clear indicator of the fact that, driven by technology from Akamai, live sporting action can be enjoyed on a smartphone which is the new frontier for audience engagement and growth.”