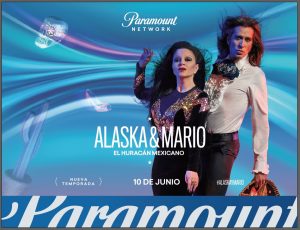 Viacom’s Paramount Channel in Spain is to change its name to Paramount Network.

Spain, the first country to launch Paramount Channel in 2012, is the first to rebrand following the launch of Paramount Network in the US earlier this year. The change will be effective as of June 10.

The revamped channel will feature a mix of movies, series and local productions, including the premiere of the fifth season of popular Spanish reality show Alaska & Mario: El Huracán Mexicano.

Other shows on the channel include The Librarians, NCIS: New Orleans and Father Brown as well as movies such as Fight Club and The Three Musketeers.

In addition to Paramount Network in the US and Spain, a localised version of Paramount channel is on air in 11 other territories internationally.

“Our channels have seen great success in markets around the world, and in Spain in particular,” said Jill Offman, EVP of the Paramount Channel / Paramount Network International and Comedy Central International.

“As one of Viacom’s flagship six, we will continue to invest in premium entertainment as we further Paramount’s profile as a global TV brand.”