Parks Associates: 50% of US broadband homes own a smart TV

More than 50% of US broadband households own a smart TV and more than 40% have a streaming media player, according to Parks Associates research. 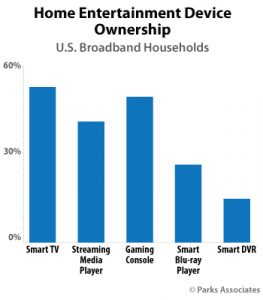 “The rise of voice control enables consumers to control their cameras and sensors and their streaming service through the same interface. This desire for simplicity drives their choice of connected platforms,” said Jennifer Kent, director, research quality and product development, Parks Associates.

Separately, Ampere Analysis has said that, in terms of weekly video viewing, the smart TV has now overtaken the mobile among millennials across 10 surveyed markets.

Ampere said that since Q3 2015 online viewing shifts among 18-34 year-olds indicate a decline in the use of desktops for viewing, while tablet viewing is largely flat.

“Millennials continue to use mobile devices more often for daily viewing with 35% of millennials watching video daily on their phones, but their increasing use of smart TVs – including OTT boxes and streamers – suggests that the big screen viewing experience remains key,” according to Ampere.