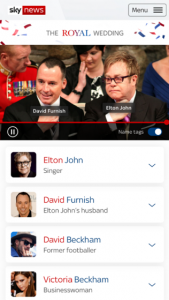 Sky is confident that its second-screen facial recognition enhancement to its coverage of tomorrow’s royal wedding between Prince Harry and Meghan Markle will work well, despite recent bad publicity around facial recognition software in the UK.

Facial recognition technology attracted controversy this week when the UK’s Information Commissioner called the police to account for a trail that saw innocent people flagged as suspects because the technology used was flawed.

Sky has teamed up with AWS Elemental to use new cloud-based machine learning technology to enhance its coverage of the royal wedding by using machine learning and media services to name guests as they enter St. George’s Chapel, Windsor, and enrich the video content with facts about the attendees.

Hugh Westbrook, product lead in Sky News’ digital team, said that the pay TV operator had tested the technology platform with users as it was being built, both to get feedback on the look and feel of the service and to verify that it worked accurately.

“We used test footage of relevant people and found that it worked as expected,” he said. “We had a very high success rate.”

One difference with Sky’s experiment, he said, is that the broadcaster is using the technology to identify “a finite list of people”. Identification is also being moderated by humans to check for obvious instances of inaccuracy or uncertainty about the identity of the guests.

Westbrook said the technology was “reasonably flexible” and could identify people in profile as well as facing the camera, although “some odd angles and hats can present problems”.

He said Sky had identified other possible uses of the technology around other events, including news and sports coverage, but that any further use would depend on the success of the royal wedding application.