Roughly 17% of mobile internet users in the UK, some 5.8 million adults, accessed the Netflix app on either a smartphone or tablet in March, according to UKOM-approved comScore data. 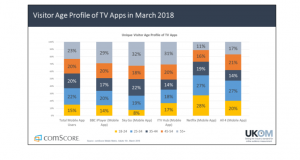 According to the stats, which are based on UK mobile app data, the number of mobile Netflix users was “significantly higher” than the unique visitors to Sky Go, the ITV Hub or All 4 – which had mobile user numbers of 3.4m, 2.5m and 1.6m respectively in March.

The BBC iPlayer was the service that had most mobile users with a March visitor count of 6.5 million. However, viewers spent more time watching content on Netflix than on the iPlayer overall during the month, with viewers watching more minutes on average on Netflix.

“Those accessing the BBC iPlayer mobile app spend on average three hours per month on the service but visitors to the Netflix app spend over four and a half hours (280 minutes) consuming its content on a mobile device,” according to the report.

ComScore said that demographics might go some way to explaining the differences in usage among the different services. It found that 55% of adult Netflix app users are aged under 35, compared to less than 40% for the BBC iPlayer, Sky Go and ITV Hub.

“Measuring total TV viewing across all platforms remains challenging and there are a vast number of factors which influence why and when consumers choose a mobile device to view TV,” according to the report.

“Content genre, cost, speed of online connection, screen availability, location, desire to multi-task and convenience are just some of them but platform usage is clearly impacted by demographics.”

UKOM aims to define and govern a “UK standard for audience measurement across PC, tablet and smartphone”. Its stakeholders are the Internet Advertising Bureau (IAB), the UK Association of Online Publishers (AOP), and the Incorporated Society of British Advertisers (ISBA). The Institute of Practitioners in Advertising (IPA) is an advisor.