Amazon Prime Channels accounts for 55% of all direct-to-consumer subscriptions in the US, according to research by The Diffusion Group (TDG). 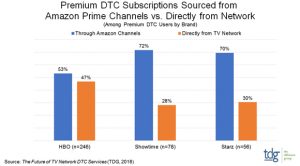 The study claims that Amazon Channels is especially prominent among premium direct-to-consumer apps like HBO Now, Showtime and Starz, with more than half of HBO’s direct subscribers using Amazon Channels to purchase their service.

Usage was even higher for Showtime and Starz, with 70% of direct subscribers using Prime Channels, compared to just 30% who used the TV networks’ websites or apps, according to the research.

“Even with Apple’s pending entry into this space, we expect this dominance to expand further in the next five years.”

The research follows a recent Bloomberg report claiming that Apple plans to start selling subscriptions to video services direct-to-consumers via its TV app, which is available on Apple TV, iPhone and iPad.