Viewers are 75% more likely to follow up on an advert they’ve seen on TV if they have a device in hand, according to a new ‘second screening’ report by MediaCom and ViewersLogic. 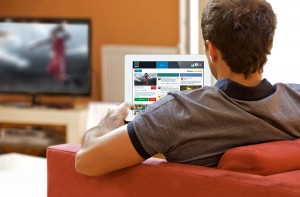 The study claims that watching TV while using a mobile or other connected device significantly improves the effectiveness of an ad.

Women were found to be more receptive to ads while second screening, with 59% of their active responses happening while they were using a second device, compared to 51% of men.

The 40-54 age group was the most responsive with 57% of all active responses happening while second screening, while 55 years and up was the least responsive at 50%, according to the research.

The study also found that viewers were 10% less likely to change channels while using a second screen device, apart from for people aged 18-24 who actually changed channels more frequently.

“In the past few years, the way people watch TV has changed quite drastically; on average, people spend around 30% of their TV time simultaneously looking at their phone or tablet,” said Pauline Robson, head of insight at MediaCom.

The results are based on a poll of 1,877 people in the UK and were consistent across all age groups, gender and TV channels sampled.