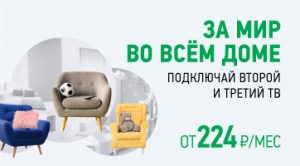 NTV+ said that the service was aimed at both new and existing subscribers. To take advantage, customers will need to purchase either an additional receiver or a CAM module, for which they will receive a free smartcard for each connected screen.

Subscribers will be able to connect up to three TV sets to one satellite dish within a single household. They will be able to view the same set of channels with a discount of 25% for two TV sets and 30% for three sets.

The broadcaster initially launched its app for Apple TV this April, enabling users to subscribe to its factual, movie, kids and sports package.

NTV+ has also launched an online store, enabling existing and potential customers to buy equipment, choose a distribution technology and order an installation online, paying by card online or in cash when the order is fulfilled.