Multiplay and IPTV growing in Spain

One million additional Spanish pay TV subscribers signed up for multi-play offerings featuring fixed and mobile telephony and fixed and mobile broadband in 2017, taking the total of such multi-play subscribers to 5.5 million, according to figures compiled by regulator the Comisión Nacional de los Mercados y la Competencia (CNMC). 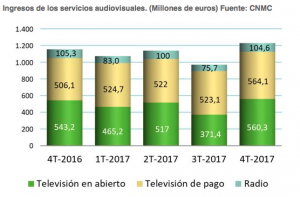 Some nine out of 10 pay TV customers took a bundled offering, up 190,000 quarter-on-quarter, with ‘quintuple-play’ offerings including fixed and mobile telephony and fixed and mobile broadband accounting for 5.5 million of the pay TV total, one million more than the previous year.

The CNMC did not record growth in online TV overall, only noting the numbers delivered by companies based in Spain, which excludes HBO, Netflix and Amazon Prime Video.

Over the same period, pay TV revenues increased by 14%. Pay TV revenues for the fourth quarter of the year were €564.1 million, while free-to-air revenues, on a seasonal high, amounted to €560.3 million.

Mediaset and Atresmedia dominated advertising, accounting for 42% each of the overall TV advertising pie. Public TV accounted for 35%, with the remainder split between other commercial broadcasters and pay TV channels.