Canal+ to use Apple TV 4K as its set-top box 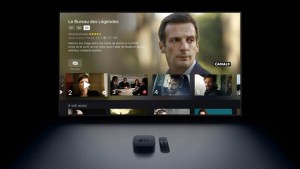 Canal+ has struck a partnership with Apple to enable its subscribers to rent the Apple TV 4K box for €6 a month and use it as their primary TV box to receive the pay TV operator’s services.

In a move described by Canal+ CEO Maxime Saada as a “philosophical revolution” in its distribution strategy, Canal+ will offer the Apple TV box, described by Saada as “the best decoder on the market”, instead of providing its own IPTV box.

Canal+ subscribers who use Apple TV will have access to content in 4K and HDR, the Apple App Store, Apple Music. Siri and other features.

Canal+ is also offering an enhanced sports offering with Multi-Live functionality – meaning that several live streams can be viewed simultaneously on the same screen, and Mode Expert, providing an overlay of live statistics.

Canal+ has already made its MyCanal app available via the Apple TV box. However, the commercial alliance goes a step beyond that by offering Apple TV as a decoder for Canal+ subscribers.

The move is targeted primarily at younger consumers who are willing and able to change their existing TV box for Apple TV, and for those who subscribe to Canal+’s OTT TV service.

Canal+ will continue to provide a dedicated satellite box for those taking its DTH offering – currently about two in five of its overall base in metropolitan France – and Canal+ will continue to be available via the IPTV boxes of Orange, Free and Bouygues, with which the pay TV outfit has distribution agreements.

The pay TV operator recently launched a new version of its satellite box. The 4K Ultra HD-capable G9 was launched in January, providing satellite and OTT services to multiple devices.

Canal+ subscriptions via Apple TV will begin from €19.99. However, Apple will likely be hoping that users of the box are more likely than the average consumer to subscribe to additional higher-tier services. Canal+ has not divulged the terms of its agreement with Apple, including how much it is investing in acquiring Apple TV devices to rent to its customers.

“We are proud toe offer Apple TV 4K and our unique selection of programming to our millions of subscribers in France. The Canal offerings reach close to one French household in five and with MyCanal we are making available to everyone features that will captivate a great number of users. Apple TV represents the perfect showcase for our premium exclusive content, in particular the cinema, sport and our original creations,” said Frank Cadoret, deputy CEO of Canal+ France.

“We think that Canal’s customers are going to love using Apple TV 4K as their decoder. Customers will be able to benefit from a rich and user-friendly experience to watch their favourite Canal programmes, as well as accessing Apple services, including the App Store and Apple Music,” said Oliver Schusser, vice-president of Apple Music and international content at Apple.