Twenty-First Century Fox has announced plans to up its investment in its Indian streaming service Hotstar after seeing strong reach and an increase in viewers for IPL cricket. 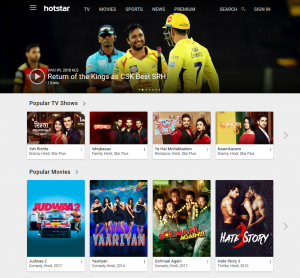 “As we proved with the IPL (Indian Premier League cricket) leveraging standout sports with strategy, we’ve demonstrated time and again that it can drive strong returns for the business,” said Murdoch.

“We expect no less from recent investments in other sports rights such as the NFL’s Thursday Night Football or the recently acquired extension of the BCCI rights in India.”

He said that 21st Century Fox is “very comfortable” Star India, which owns and operates Hotstar, will reach its US$500 million EBITDA target and claimed that Hotstar “continues to thrive as the go-to digital video platform”.

The company said that Hotstar’s reach in April exceed 140 million people and that watch-time on the service for IPL had grown by a factor of more than two and a half times year-on-year.

“To put Hotstar’s scale into perspective, we had 7 million concurrent live streams during a single IPL match this season, which is likely the highest ever for a sporting event on a streaming service in the world.”