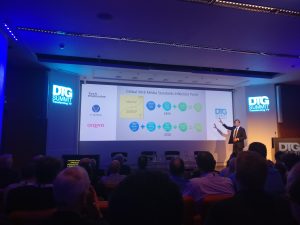 Speaking at the DTG Summit in London yesterday, Simmons said that the industry is seeing a comparable inflection point to the internet in 1993 when HTTP, HTML and the Mosaic web browser created a new web experience.

Simmons drew a parallel between 1993 and 2018 when the emerge of Common Media Application Format (CMAF), Dynamic Adaptive Streaming over HTTP (DASH), HMTL media extensions and progressive web apps are creating a “mobility of web media experience”.

“What had happened was Tim Berners-Lee had not just invented HTML and HTTP, he had reimagined the internet,” said Simmons. “The same thing is happening here with media. The same standards are creating a mobility of web media experience, so we’re in a position where we need to re-imagine media consumption or re-imagine television.”

Discussing this re-imagined media consumption, Simmons described three tiers of commercial web media: tier one is bandwidth-constrained linear content from cable, satellite or telco providers; tier two is direct-to-consumer offerings such as Netflix or HBO Now; and tier three is long-tail or niche content that he argued is being made practical by global internet standards for commercial media.

“This is what is made possible by that standardisation, where it takes away the friction that would prevent say all the work that Netflix had to do to get on every device that you have in the home. Once you have these standards, getting a channel distributed broadly becomes a relatively easy thing, opening up this third tier.”

“All of these changes in the internet, all of these web standards, constitute an inflection point and an opportunity for you in the broadcast world to reimagine television.”