TV households in Europe are primarily adopting online subscription video-on-demand services as a supplementary form of video entertainment, rather than a replacement for pay TV. 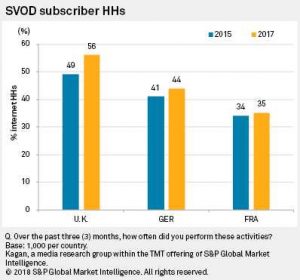 This is according to research by Kagan, the telecoms media and technology research arm of S&P Global Market Intelligence, which claims that the overall percentage of cord cutters in Western Europe is flat or declining – indicating that people are not dropping pay TV in favour of SVOD.

“Comparing historical data over the past two years shows that the level of non-multichannel TV households in the UK and Germany has remained essentially flat within the statistical margin of error,” according to the report.

“Data from the France surveys shows a 7-percentage point increase over 2015 and 2016 levels. However, none of the three countries exhibit the steady increase in non-multichannel TV households typically associated with a video cord-cutting trend.”