Unitymedia has started to roll out 1 Gbps broadband in Germany, launching the 1,000 megabits per-second fibre connections in Bochum, a city in the west of the country. 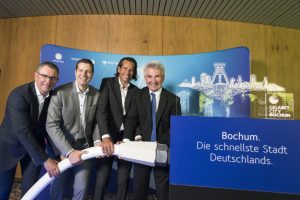 Unitymedia said that the launch establishes Bochum as “the first major German city to enter the gigabit era,” with launches in more cities in the planning stages.

An introductory offer will make the service available for €49.99 per-month with a minimum contract of 24 months. The regular price will be €109.99 per-month.

Unitymedia said that from the middle of the year business customers will also be able to book a gigabit tariff at Unitymedia Business.

The fiber optic-based cable network in Bochum uses the new DOCSIS 3.1 transmission standard and Unitymedia said in a statement that planning for other cities and regions with gigabit speeds is “already in full swing”.

“Today we start the gigabit era in broadband cable. Unitymedia is the first provider in Germany to open up access to gigabit speeds for cities and regions and millions of people,” said Unitymedia CEO, Lutz Schüler.

“The launch of the Gigabit City Bochum is a prelude to further gigabit network expansion for us: more cities and regions will follow until the end of 2018.”