Netflix was the slowest growing of the UK’s main SVOD services in last year, achieving a 25% growth rate in subscribers, adding 1.6 million to reach a total of 8.2 million, while Amazon grew by 41%, adding 1.3 million subs to reach 4.3 million, according to audience ratings agency BARB’s annual exploration of UK viewing habits. 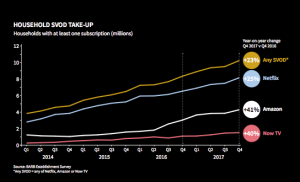 Now TV, counted as a competitor to Netflix and Amazon by BARB, achieved growth of 40%, adding 400,000 subs to reach 1.5 million, according to BARB’s The Viewing Report.

BARB also found that 50% of all BBC iPlayer viewing in 2017 was via connected TVs and this proportion appears to be steadily growing, according to BARB, with connected TVs now available for 63% of individuals in TV homes.

On non-TV devices, tablet viewing ranks first and peaks in the morning. Tablets dominate breakfast and commuting time viewing, with a 58% share of device viewing at 07:00.

Despite the supposed decline of popularity of tablets, these devices continue to take around 45% of viewing time on non-TV devices, according to BARB. PC viewing has declined by 4.3% year-on-year between q4 2016 and Q4 2017.

Children’s share of online viewing by device at 8.4% was ahead of their share of traditional TV set viewing at 6.5%, while 16-34s take a far higher share of device viewing at 24%, compared to 15% of that via a TV set.

Drama dominated on-demand viewing, lead by shows such as Three Girls, EastEnders and Doctor Foster, along with event TV shows such as The Apprentice and The Great British Bake Off. Live streaming was dominated by football, rugby and Formula 1.