YouSee launches comedy channel as it invests further in content 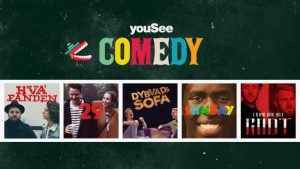 TDC Group-owned Danish cable TV service provider YouSee is launching an own-branded comedy channel that will feature the work of some Denmark’s most popular comedians.

The channel, YouSee Comedy, launches today, and will include both homegrown programmes and shows from abroad, including BBC 3 comedy This Country.

The channel will feature the work of established Danish comedians such as Tobias Dybvad, Magnus Millang, Esben Bjerre, Peter Falktoft and Casper Christensen, along with new acts such as Julie and Jesper, and Melvin.

Shows will include Dybvads Sofa featuring Jesper and Julie, and Sunday, featuring Melvin.

The channel will be available to all YouSee TV customers and will also be available via multiscreen apps and the web.

YouSee media director Christian Morgan said that the aim of the channel was to create “a playground where experienced comedians can try new things and unleash their creativity” as well as an “incubator of new talent”.

Earlier this year, TDC Group agreed and subsequently pulled out of a deal to buy Modern Times Group’s broadcasting and streaming arm. The agreement fell through following Macquarie’s subsequent successful bid for the Danish telco.