Pay TV operators globally are still seeing growth, the subscriber additions for the last quarter of 2017 exceeding growth for the same period the previous year, according to Informitv’s Multiscreen Index. 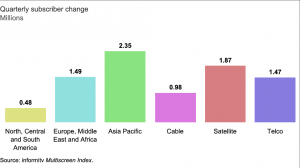 The Asia Pacific region led the way, adding .35 million subscribers, which is fewer than in the preceding two quarters but about the same number as in the comparable quarter a year previously.

The top 10 providers in the region added 1.65 million subscribers, mostly in India. Dish TV and Videocon d2h, which have since merged, added 360,000 subscribers between them.

Services in the Americas region added 480,000 subscribers, improving on a decline in the previous two quarters and bringing this region to the same level as the previous year.

The top 10 services in the US gained 84,600 subscribers, largely through the contribution of the DirecTV Now online service, which added 362,000 subscribers.

Satellite services grew fastest, adding 1.87 million subscribers worldwide. That is despite DirecTV losing 147,000 satellite subscribers, which was the largest loss among services in the index. The greatest gain was for Canal+ Africa, which added 658,000 subscribers, taking its total to 3.46 million. The service added 516,000 in the same quarter the previous year.

“Although there is a popular perception that pay television subscriber numbers are falling, they are continuing to grow worldwide at a rate of around 1% a quarter,” observed Dr William Cooper, the editor of the Informitv Multiscreen Index.

“Much of the growth is in developing economies. Although average revenues are lower, there is still significant potential, with worldwide gains of around 10% forecast over the next five years.”