Pay TV penetration in Russia reached 75% in Q1 2018, but the rate of growth slowed to its lowest point in the past 10 years, according to Telecom Daily. 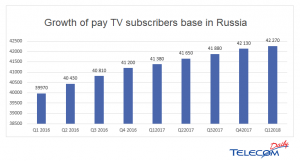 The Russian research outfit said that the total number of pay TV subscribers in Russia at the end of March stood at 42.7 million – just 141,000 more than three months earlier.

Telecom Daily reported that fixed-line services accounted for over 80% of new connections in Q1, with DTH claiming the remainder, and said that average revenue per pay TV users in Russia is RUB170 (€2.25).

“The activity of pay TV operators in the first quarter of the year didn’t let them to attract more subscribers and this tells us that the market is very saturated,” said Denis Kuskov, head of Telecom Daily. “Operators try to grow ARPU by offering more and more additional services.”