Global pay TV revenues peaked in 2016 will fall by 11% between then and 2023, according to Digital TV Research stats. 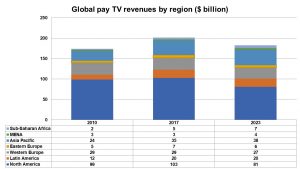 The new report estimates that worldwide pay TV revenues will decline from a high point of US$205 billion in 2016 to US$183 billion in 2023 – despite the overall number of pay TV subscribers climbing by 9%.

Of the 138 countries covered by the Global Pay TV Revenue Forecasts report, Digital TV Research estimates that revenues will decline in 47 countries between 2017 and 2023 – including in eight of the top 10 countries.

“North American revenues will fall by a huge US$22 billion between 2017 and 2023,” said Simon Murray, principal analyst at Digital TV Research. The report claims that US pay TV revenues peaked at US$102 billion in 2015 and will fall to US$75 billion in 2023.

“The global decline [between 2017 and 2023] will be US$19 billion, so the other regions will grow overall,” said Murray. “Western Europe will lose US$2 billion but Asia Pacific will record a US$3 billion increase.”

China and India are expected to increase their pay TV revenues by US$1 billion and US1.6 billion respectively between 2017 and 2023.

“Revenues will more than double for six countries between 2017 and 2023,” according to the report. “Eight of the top 10 fast-growth nations by percentage increase will be in Africa.”