Netflix viewers “by far” prefer tuning into the subscription video-on-demand service on smart TVs than other devices, according to Ovum stats. 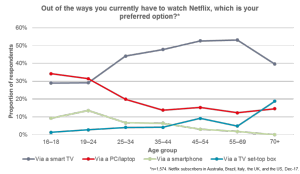 The research firm found that 44% of survey respondents across five markets said that the smart TV was their favourite screen for watching Netflix, with screen size and ease of use cited as the main reasons the popularity

By comparison, the second-most popular device – the PC or laptop – was favoured by 19% of Netflix subscribers. However, this was the most popular device among 16-24 year-olds, who also showed a higher preference for watching on smartphones than any other age group.

While only 5% of respondents said that the TV set-top box was their favourite device to watch Netflix, the percentage was between 15-20% for subscribers to pay TV services that offer integrated access to Netflix and skewed higher for subscribers to high-end pay TV packages.

The report sad that streaming devices like Google Chromecast, Amazon Fire TV and Apple TV are having a “more modest impact”, with just 3% of respondents preferring to watch Netflix via media streamers – despite 18% using one or more of these devices to watch premium video.

“The smart TV will remain the experience to beat – or embrace. The bad news for operators is that 42% of subscribers to providers that offer integrated pay TV/Netflix services stated the smart TV was their preferred way to watch Netflix,” according to the research.

The data is based on an Ovum Digital Consumer Insights survey of 5,000 internet users in the UK, US, Italy, Australia and Brazil, which was conducted in December 2017.