Russian pay TV provider NTV+ has launched an app for the Apple TV platform that allows users to watch over 180 channels on TV via the device. 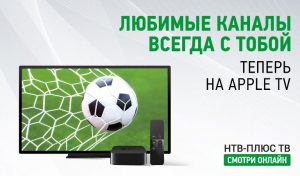 Owners of Apple TV boxes will be able to sign up for NTV+’s Supersport, Supersport Premium, football, kids, movies and factual packages via the app.

Subscribers will also be able to access catch-up functionality, with most content available for 24 hours after it was initially aired, as well as pause live TV.

NTV+ said that its launch on Apple TV would enable it to provide an offering for a high-earning segment of the market that was steadily growing. The company estimates that the offering will enable it to grow its online subscriber base by 10-15%.

Subsequent updates to the app will include further access to sports on-demand including highlights from a free archive and on-demand access to the Amediateka: Home of HBO service. The operator said that satellite subscribers would be able to use the Apple TV box to deliver multiscreen services.

NTV+ CEO Mikhail Demin said that the operator planned to follow up the Apple TV launch with further launches on Android devices and smart TV platforms.

Separately, NTV+ has launched a pay TV service in Georgia. Viewers in the country will be offered tow packages of channels. One will include 50 Russian and international channels and the other will offer an expanded package of 90 channels.

Demin said that NTV+ had not ruled out further launches across CIS countries.

NTV+ estimates that pay TV penetration among Georgia’s population of 3.7 million stands at around 50%, with most Georgians viewing TV via satellite.