The SVOD provider will use Bitmovin encoding to enable the deiiver of content in HD over low-bandwidth mobile networks. Iflix will use Bitmovin’s encoding tools via the latter’s containerised software running inside its own infrastructure to run an H.264-based encoding workflow. 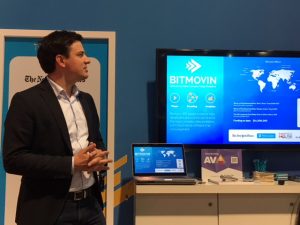 Speaking at a press event at the NAB Show in Las Vegas, Bitmovin co-founder and CEO Stefan Lederer said that while Iflix needed to deliver content over bandwidth challenged networks in emerging markets, with the end of net neutrality in the US, video providers there would need to be more efficient too, opening up a new market for Bitmovin’s products.

Following the release of version 1.0 of the new royalty-free AV1 video codec two weeks ago, Bitmovin also used the NAB Show to highlight its leadership in advanced encoding. Lederer said AV1, as an open media codec, was more aligned to the way internet technologies had developed than previous MPEG video codecs, including HEVC, the deployment of which has been hindered by high licensing costs and a multiple licensing bodies. On the internet , basic technologies are free and money was made from applications that sit on top of these, he said.

“Money is made from applications,” he said. “HEVC has not been successful because there are so many problems…with the licensing situation. There are so many companies backing and contributing to this [AV1] standard. This is just the beginning. Now the industry needs to build products and that is exactly where Bitmovin comes in.”

He said that this year browsers like Firefox and Chrome would support AV1 in their standard deployments. “I’m confident we will see AV1 in production this year,” he said.

While AV1 can be deployed for viewing video on the web, integration in chipsets will be required for wider adoption, including for mobile video. Lederer said he was confident silicon would be available soon. “We see these different phases coming in the next year or so,” he said.

Bitmovin is providing reference streams for AV1 enabling chipset makers to work with the standard, he said.

Lederer said that AV1 could provide over 40% encoding gains over HEVC at high bit rates of between 8-20Mbps. At lower bit rates of 1-7.5Mbps gains of 27% were possible, he said.

Lederer said that Bitmovin is now applying AI to its encoding products. He said the company found “really interesting applications” in applying machine learning to its encoding stack. “We call this AI-based encoding. We added a third encoding pass and using our AI engine we see millions of files and get a feeling of how we can best distribute bits within this file,” he said.

The company has also used the NAB Show to introduce a new version of its player. The V8 player is 75% smaller than the previous version and “more adaptive to the user context”, said Lederer. Customers do not need all player features at the same time, so Bitmovin had built a modular player that enabled customers to cherrypick features they need and put them together on an a la carte basis, he said.

“Every type of customer is different. Cable companies are different from broadcasters and telcos. Outside of the classic media space you have e-learning, corporate video and so on. Customers can take our products and apply them in their own segment,” he said.

Lederer said this type of flexibility would become more in demand in the future, as the world moves away from end-to-end solutions.

The Bitmovin team co-created the MPEG-DASH standard, which now accounts for over 50% of US internet traffic, said Lederer. He said that the company had hosted the first AV1 stream at the NAB Show last year ahead of the standard being completed, and he expected it to be similarly ahead of the curve with the forthcoming H.266 codec.