Lionsgate: broadcast still ‘most lucrative’ for drama despite streaming explosion

Broadcast will remain a highly relevant platform for scripted drama, with some types of show better-suited to the syndication model than sales to streaming platforms, according to Kevin Beggs, chairman of independent producer Lionsgate. 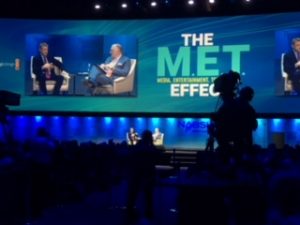 Speaking at the opening of the NAB Show in Las Vegas on Monday, Beggs said that the choice of distribution platform could depend on the ambitions of a particular show’s creators to a large extent. While some showrunners and content creators are looking for creative freedom, others are looking for audience reach. The former are likely to find a more comfortable home on streaming platforms, but the latter are still more likely to look to traditional broadcast distribution, he said.

“In this arms race of content the notion you can sell to broadcast, cable or streaming or direct to the tech companies…[means] there is a lot of choice. There is no question the broadcast model is most lucrative,” he said.

“A standalone procedural show…is infinitely [more suited to] syndication,” he said. Some shows such as Breaking Bad are less easy to syndicate than the likes of Law and Order, but appeal more to an audience keen on binge-viewing, he said.

“When you think of a show that will be a massive hit…that is probably not a show you want to give to a streamer,” he said, adding that streaming is “not for every show that we do”.

Beggs said that Lionsgate did not get audience numbers from platform providers for every show it put on streaming services. Feedback from such services was “more like college grades”, he said, meaning that if a streaming platform provider said the show was going well, that was likely to mean it had achieved high numbers, whereas if they said it needed “time to bed in”, that could mean it had fallen short in terms of take-up.

In a wide-ranging interview onstage at the NAB Show, Beggs said he was “generally against” integration of distributors and producers, something that is seen as a growing trend as content distributors seek to carve out exclusive content rights to drive subscriptions. “The traditional wisdom that [vertical integration] is all bad”, he said, while conceding that it often “looks like a natural next step”.

Beggs said that when pitching to a distributor with its own in-house production arm, Lionsgate as an independent had to produce something “five times as good” to beat the in-house option. However, on the upside, distribution platforms have proliferated, meaning that there are now far more avenues to secure distribution of a show than was previously the case.

Beggs said that independents can also help smaller distributors by bearing some of the financial burden of producing a show in exchange for keeping some of the downstream rights.

“As a studio, one of the things we bring to the table is the financial piece. If a network pays 60% [of a show’s budget], we pay the other 40%,” he said, based on its assumption that it would be able to monetise rights it retains in distribution windows further along the road.

Beggs cited the example of Bojack Horseman as a show that had initially appeared on a streaming platform but was now set for broadcast syndication.

“In that case Michael Eisner’s company held onto some of those downstream rights. I think that if the streamers play ball…you will see more of that,” he said. However, he cautioned, “it takes a long time to get enough episodes to put [something] into syndication”.

Beggs said that Lionsgate was increasingly looking beyond scripted drama to unscripted content and video games.

With regard to unscripted content, he said that it was hard to find winning formats. However, the growing interest in unscripted shows from streaming platforms means that the market is expanding, he said.

Beggs said that Lionsgate had created a Lionsgate 360 committee to look at how to exploit intellectual property across multiple platforms, including video games.