The global pay TV business will gain 95 million new subscribers between 2017 and 2023 to take its total global base to 1.1 billion, according to Digital TV Research. 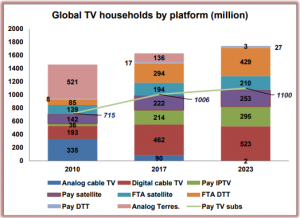 According to Digital TV Research, based on forecasts for 138 countries, the global pay TV total base passed the one billion mark last year.

IPTV platforms will win most of the new subscribers likely to sign up over the next five years, taking 81 million new customers to overtake pay TV satellite subscribers this year, according to the research outfit.

Analogue cable subscribers numbered 90 million at the end of last year, representing a significant challenge for operators keen to convert them to digital services. Overall, Digital TV Research predicts there will be 525 million cable TV subscribers by 2023, down only slightly from the 528 million recorded in 2010.

Eastern Europe will lose 2.4 million subscribers between 2017 and 2023 – down by 2.9% to 79 million. This is more to do with poor economic conditions than cord-cutting. Eastern Europe also has a legacy of low-paying analog cable TV subscribers to convert to digital. 2017 was the peak year for the region. The 2017 total included 20 million analog cable subscribers.

Western Europe will still gain subscribers between 2017 and 2023. Although this only represents a 2.6% increase, it means nearly 3 million more subs to take the total to 106 million.

The Asia Pacific pay TV sector is vibrant, with subscribers up by 78 million over the next five years to 686 million.