The average monthly expenditure by US broadband homes on video entertainment outside of a pay TV subscription has dropped from US$29 (€24) to US$23 over the past two years. 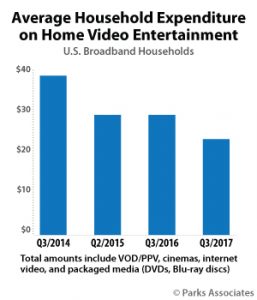 However, the research firm said that spending on internet video has held steady at roughly US$9 per month for several years, despite an apparent decline in multi-device video viewing.

“The number of overall consumers viewing video on a connected device remains steady at 92% of US broadband households, but viewers are using fewer devices to access that content,” said Brett Sappington, senior director, Parks Associates.

“This finding indicates that consumers are starting to settle into particular viewing habits. They are focusing more on their favourite screen and connected devices and are reducing time spent on other video screens.”

Parks also said that currently one-fifth of US pay TV subscribers have the ability to access online video services through their set-top box, while one-third of subscribers say access to OTT via a pay TV interface or channel guide is appealing.

“Many consumers now see OTT video as complementary to both other OTT video services and pay TV services, rather than a replacement. Today’s OTT market is much more about bundling and partnerships than it is about winning subscribers from direct competitors.”