Eutelsat teams up with Orange in new satellite broadband project 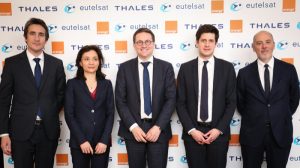 Eutelsat has ordered the Konnect VHTS from Thales Alenia Space. The new craft is scheduled to go into orbit in 2021.

The satellite will have a Ka-band capacity of 500Gbps and will include what Eutelsat describes as the most powerful on-board digital processor ever put in orbit.

Eutelsat has secured multi-year distribution commitments from Orange and Thales. A retail partnership was signed with Orange to address the fixed broadband market in European countries where the Group has a retail presence, and a distribution partnership was inked with Thales to serve the government connectivity services market.

The Konnect VHTS project replaces a plan for a joint investment with ViaSat in a ViaSat 3 satellite for Europe, Africa and the Middle East, and is covered by Eutelsat’s capex objective of spending an average of €420 million per annum.

Rodolphe Belmer, CEO of Eutelsat, said: “We are delighted to sign this agreement with global partners, Orange and Thales, which confirms the place of satellite-based solutions in the drive for enhanced high-speed internet coverage. As a core complement to terrestrial broadband networks, high-speed broadband will be a critical driver of Eutelsat’s growth from 2020 onwards. Over the next decade, VHTS satellites will bring enough capacity to serve high speed internet and in-flight connectivity markets at scale, offering fiber-like services both in terms of price and speed.”

Stéphane Richard, chairman and CEO of Orange, said: “Satellite is one of the technologies that contribute to building tomorrow’s inclusive digital society, especially for delivering broadband connectivity in rural areas where it is sometimes challenging to set up traditional broadband networks. With this agreement, we will enhance our portfolio of very high speed internet solutions delivered by satellite, offering all our customers across Europe digital services of premium quality.”