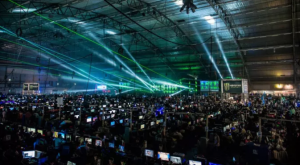 Some 3.8 million French online users have watched or attended a live eSports event, according to a study by audience research group Médiamétrie.

Sports games are the top-rated games favoured by eSports enthusiasts, with 43% placing these at the top of their list of preferences. First-person shooter games came second, favoured by 34%, followed by online battle arena games, favoured by 27%. Multiplayer card, real-time strategy, combat and role-playing games are also popular.

Médiamétrie found that a significant digital community, including online influencers, is building up around eSports. Some 4.9 million online game users said they followed a gaming influencer. Some 77% of respondents cited YouTube as a platform used to follow influencers, followed by Facebook, mentioned by 35%, Twitter, mentioned by 26%, multichannel network Twitch with 14% and TV channel Game One with 17%. Some 2.3 million users said they had purchased a produt after seeing an influencer use it.

Médiamétrie said that eSports now offered significant opportunities for sponsors. Some 61% of spectators have identified sponsor brands during an event, and 29% of online gamers have noticed advertising while they’re playing.