Asia Pacific due to grow pay TV numbers by 13%

The Asia Pacific pay TV sector is due to grow its subscriber numbers by 12.8% between 2017 and 2023, bucking downward trends in much of the rest of the world, according to Digital TV Research. 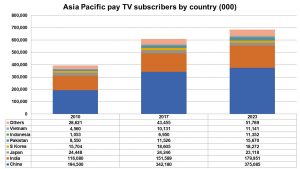 This marks an increase of some 77.7 million subscribers, with China and India remaining the top one and two countries respectively in 2023, followed by Japan and then South Korea.

“China and India together will account for 81% of the region’s 686 million pay TV subscribers by 2023,” said Simon Murray, principal analyst at Digital TV Research.

Overall, IPTV is expected to account for an extra 67 million pay TV subscribers across the region, while pay satellite will climb by 26 million. Cable pay TV numbers are tipped to fall as a gain of 37 million digital cable subscribers fails to offset a decline of 52 million analogue cable subscribers.

Pay TV revenues across the region will grow by US$2.73 billion over the forecast period, according to Digital TV Research.

India is expected to contribute US$1.6 billion in additional revenues, China an extra US$924 million and Indonesia an extra US$472 million. However, pay TV revenues are predicted to fall in six countries between 2017 and 2023 – including Japan, South Korea and Hong Kong.

By 2023, pay TV revenues are expected to reach US$37.89 billion – two thirds of which will be accounted for by China, India and Japan.