The migration of IP-delivered content to the TV screen and the growing popularity of live-streaming is driving strong growth in premium video advertising in Europe, according to a report by Comcast-owned advertising technology outfit Freewheel. 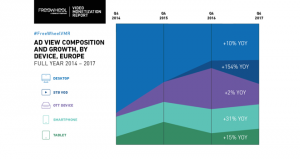 According to Freewheel’s Q4 Video Monetisation report, set-top video-on-demand consumption and OTT TV delivery had a combined share of 37% of advertising views in Europe at the end of Q4 2017. Set-top VOD saw year-on-year growth in ad views of 154% for the quarter.

Live streaming video viewing grew by 45% and ad views on live-streams grew by 30%, according to Freewheel.

Ad views from clips also saw growth in Europe in Q4, increasing 119% year and representing 21% of the market, according to the report.

The year saw a decrease in ad loads in the premium online video space in Europe, according to the report. On average, viewers in Europe experienced 4.63 ads per long-form break in Q4, compared to 5.95 ads per break in Q4 2016; equating to a reduction of 42 seconds.

Thomas Bremond, General Manager, International, Comcast, said: “Following a year when transparency and brand safety hit the headlines, it is time for TV and digital to learn from each other to provide a better advertising experience for viewers. Premium video content can make this connection by combining the high-quality, fraud-free environment of TV with the data-driven programmatic capabilities of digital.”