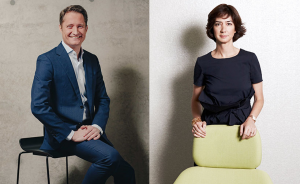 Her exit comes after 23 years at Fremantle and its predecessors, and a process is already underway to find a successor.

Frot-Coutaz (above right) is understood to have a twelve-month notice period, but is unlikely to work all of that. RTL said its executive committee was in “constructive talks” with her about “a smooth transition at the helm of the group’s global content arm”.

RTL CEO Bert Habets (above left) credited Frot-Coutaz for putting “creativity back in the centre of the company” since her reign began in 2012, when she succeeded Tony Cohen.

“With its expanding slate of high-end drama series and iconic entertainment shows, FremantleMedia is strongly positioned to grow significantly in the future,” he added. “I regret, but understand Cécile’s decision. All of us wish her the best in her future endeavours.”

Frot-Coutaz’s appointment at YouTube will likely be confirmed officially today. At the Google-owned business, she will work closely with YouTube chief business officer Robert Kyncl on growth strategies in Europe, the Middle East and Africa.

“I’ve always said that two things would need to be the case for me to consider leaving,” she told Fremantle staff in an internal memo seen by TBI. “First, and most importantly, Fremantle would need to be firing on all cylinders – brimming with creative excellence and unstoppable momentum. Second, it would take a unique challenge that offers me something completely new and different.”

“Both of those conditions have been met, and it is therefore with a heavy heart but unshakeable confidence in the future that I have decided to leave Fremantle and open a new chapter in my professional life.”

She added that she would not be exiting until a successor was picked, and said: “I go on to explore new challenges safe in the knowledge that Fremantle’s best days lie ahead.”

At that point, she was named corporate strategy officer, and next shepherded the integration of All-American Fremantle into the Pearson TV.

Later, after a spell working on online and interactive strategies, she joined the newly rebranded FremantleMedia in LA as executive VP of commercial and operations. By 2005, she had been appointed CEO and was then named as Cohen’s London-based successor for the wider group in 2012.

Since then, she has focused on investments in new companies, and high-end scripted dramas to sit alongside reality format stalwarts such as The X Factor, Idol and Got Talent in the Fremantle stable.

The company recently moved out of children’s TV production, selling the assets of its FremantleMedia Kids & Family unit to Boat Rocker Media.

Those changes are separate, however, and sources have described Frot-Coutaz’s exit as “entirely amicable”.