Fifth of US broadband homes use digital antenna to access TV

The number of US broadband homes that use digital antennas to access live TV has increased from 16% in early 2015 to 20% near the end of 2017, according to Parks Associates. 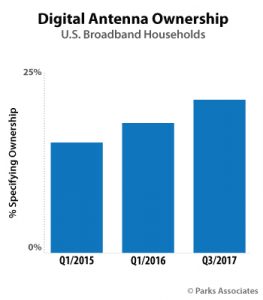 The research firm said that while the number of households that have never subscribed to pay TV services has held steady, the percentage that have cut the cord has increased between 2015 and 2017.

Of the homes that have switched, ‘shaved’ or cut the cord, more than 50% said they did so because they thought the service was “not worth the cost,” according to the study.

“Increasingly, consumers are cobbling together their own bundles of content sources,” said Brett Sappington, senior director of research, Parks Associates.

“Digital antennas are experiencing a resurgence as consumers consider over-the-air TV and OTT video services as alternatives to pay TV.”

According to Parks, 17% of US consumers who cancelled their pay TV service would have stayed with their provider if there were no monthly fee for their set-top box.

The research also claimed that only 46% of pay TV subscribers are aware that they can access video-on-demand content from their operator.

The news caps a bleak week for US pay TV stats, with Kagan reporting that traditional pay TV subscriptions dropped by 3.7% in the US last year and Leichtman Research Group saying that the top US pay TV providers lost close to one and a half million subscribers in 2017.