Disney-owned video streaming technology firm, BAMTech, has launched the NHL app it operates in partnership with the National Hockey League on Amazon Fire TV devices in the US. 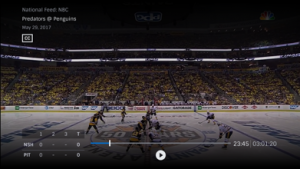 Additional NHL.TV features within the Amazon Fire TV app include game recaps, condensed games, and a video library of highlights and archived games.

“This season, we set out to bring fans new experiences for watching their favourite teams wherever and whenever they want,” said Whitney Howard, senior vice president and general manager, Hockey, BAMTech Media.

“Today’s launch on Amazon Fire TV is an exciting development in expanding the NHL’s digital footprint and we’re looking forward to the follow-on launch of Amazon Fire tablets soon.”

Disney paid US$1.58 billion (€1.34 billion) in August to up its stake in BAMTech to 75%. It plans to use the company’s technology to power is forthcoming ESPN+ over-the-top offering and a new Disney-branded streaming service that is due to go live in 2019.

Earlier this week Disney restructured to create a worldwide division that will house international operations and its upcoming streaming services.