Price continues to drive pay TV subscribers to cut their services, while more than fourth fifths of people said they would like to pay for only the channels that they watch, according to new research by TiVo. 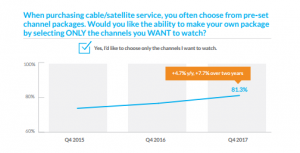 The company’s Q4 2017 Online Video and Pay TV Trends Report found that 49% of respondents to the North American survey pay US$51-US$100 per month for a cable or satellite service while another 20% pay US$126 or more.

Among those that were dissatisfied, the main reason stated at 83.1% was that pay TV is too expensive. Some 7.3% of respondents said that they plan to cut their pay TV service in the next six months, while 5.7% said they plan to switch to an online service or app.

In Q4 a massive 81.3% of survey respondents said that would like to be able to only pay for the channels they want to watch – an increase of 4.7 percentage points year-on-year and 7.7 points over two years.

In the US, the average price respondents said they would want to pay for a package of self-selected channels was US$35.87 per month for 24 channels – roughly US$1.50 per channel per month.

The report noted that this price compares to many of the new breed of virtual pay TV services available in the US today – including Sling TV and YouTube TV – and said that pay TV providers should offer “competitive packages within this desired price range.”

“Price continues to drive respondents to cut pay TV service, making TiVo wonder: what actions can pay TV providers take to retain this audience? Are providers leveraging the necessary subscriber data to identify potential customers at high risk of churn and are pay TV providers targeting their marketing to this group in effort to combat this action?” said the report.

YouTube TV also experienced “notable adoption” following its introduction last year and is bow the fourth most popular SVOD service ahead of Sling TV, DirecTV Now and CBS All Access, according to the report.

The research was based on a survey of 3,330 people in the US and Canada and was conducted in the fourth quarter of 2017.