Between 2013 and 2017 the amount invested in content by the major three SVOD platforms increased from US$5.5 billion to US$13 billion with “no signs of slowing”, according to Parrot Analytics. 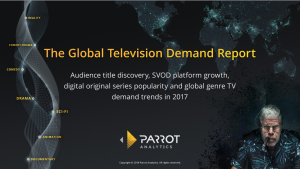 The research firm’s Global Television Demand Report for 2017, claimed that while Netﬂix has always been the market leader in content spend, Amazon and Hulu are “catching up”. However, Netflix’s content still led the pack in terms of popularity.

“Netﬂix had 64% to 88% demand share by total digital original series popularity in all markets examined in this report,” said Parrot. “While demand for Amazon generally decreased, the demand for Hulu grew over the year.”

In the US, Netflix’s Stranger Things was found by Parrot to be the most popular digital original series in 2017, followed by another Netflix original 13 Reasons Why. Third most popular in the US was CBS All Access’ Star Trek: Discovery.

“With over 50 new titles released in 2017 alone, Netﬂix accounted for over 70% of the total demand for digital original series [in the US]. Amazon, Hulu, and all other platforms accounted for an equal amount of demand with 10% each,” said the research.

In the UK, the top two most popular digital original series of the year were the same as in the US, with Netflix’s Mindhunter coming in third place.

In France the top three were Stranger Things, followed by Black Mirror and 13 Reasons Why. In Germany Stranger Things was top with Star Trek: Discovery in second place and Dark in third.

Parrot also did research into how people discover TV shows and found that in most markets word of mouth – both online and offline – was the most common way to discover new content to watch.

Some 34% of people in each market looked to friends and family for recommendations, while 26% found shows offline either via television listings and guides or through advertisements. Online, about 19% discovered new content by browsing articles, news, and blogs.

“The global consumer entertainment market is fractured and TV series viewing is happening across a multitude of platforms and devices,” said Samuel Stadler, vice president of marketing, Parrot Analytics.

“We were surprised to find that, offline and online, as well as in all territories, conventional ‘word of mouth’ recommendations are still the predominant way new content is discovered.”