Atrium, the drama ‘production club’ set up a year ago by DRG chairman Jeremy Fox and ex-Sony chairman Howard Stringer to produce high-end international drama for telecom operators to enable them to compete with the likes of Netflix, will present four new projects in May on top of the two already in development, Fox told attendees at Mobile World Congress in Barcelona yesterday. 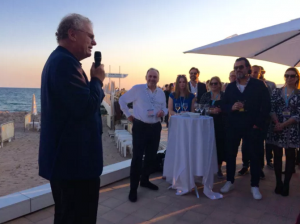 Atrium is about creating a club of telcos, producers and content companies and putting them together in order to commission content that can be distributed over multiple platforms globally. According to Fox, the ‘club’ now includes most of the telcos in Europe and free and pay TV operator Modern Times Group, as well as OTT TV providers like Naspers-owned Showmax, Asian SVOD player Iflix and Bigflix from Reliance in India.

Aggregating multiple players means that budgets can grow to match the production values supported by the likes of Netflix, according to Fox.

“We create the ideas and these are Netflix type ideas – US$5-10 million an hour productions – and find the talent, put the packaging together based on the writer’s vision. At some point we get all these guys in a room, with about 45 million subscribers between them, and the writers presented their ideas,” he said.

“[High-end drama] is not a cheap proposition. If you are a [single] telco you can’t afford it. By grouping people together everyone pays their share,” said Fox.

The first two projects are underway. The first, One Giant Leap, is about the first moon landing – in time for the 50th anniversary of the event next year – and is being made by Stephen Kronish (The Kennedys, 24). The second project, Quasimodo from the team behind Game of Thrones, is a fantasy historical drama.

Four more projects will be presented in May. Atrium funded the first three scripts of each show and will go back to the partners to “ask the tough questions” about commitment, including whether operators want the shows exclusively, just for their territory and whether they want to invest in them. The projects will not appear until “2019 at the earliest”, he said.

Atrium does not intend to take on Netflix in terms of volume. However, Fox said Atrium does have the advantage of being able to incentivise talent to partner with it because, unlike Netflix, it doesn’t demand global exclusivity.

“I can’t compete with Netflix. We will only produce one or two shows a year but I can get the talent…because we share the rights with the creator,” he said.

Telcos will still produce their own “local” shows, said Fox, but “once or twice a year” they can “break out of that” by carrying a title with wider international appeal, with much of the spend for this likely coming from the marketing department. This will create “must see” content that will lead consumers to subscribe to the service in question, he said.

He added that Atrium is “very much a European operation”, but creatives had been asked to “deliver something that is worldly”. By creating these shows in Europe and taking them to the US second, it is developing “a completely different way of doing the business”, he claimed.

Fox said that Howard Stringer is currently talking to big American networks such as HBO to offer them expensive shows that they will be able to acquire in a later window for a lower price.

He added that he personally had an ambition to make the “definitive drama about the Vietman war” based on Anthony Grey’s epic novel Saigon, which spans the period from the 1920s to the beginning of the Vietnam war and US involvement.