The number of subscribers to pay TV in Russia grew by 3.2% last year to 42.7 million, representing a penetration rate of 75%, according to research by TMT Consulting.

The leading growth operators were Rostelecom, which added 600,000 customers in the year, MTS , which grew primarily through the expansion of its satellite base, and ER-Telecom, which grew by acquiring Novosibirsk operator Novotelecom and Akado’s networks in St Petersburg and Yekaterinburg. 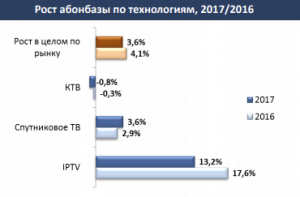 IPTV operators accounted for the bulk of the growth in subscribers, with 900,000 new customers signing up for IPTV services over the course of the year. Growth in the satellite segment increased year-on-year, which was attributed by TMT Consulting to MTS’s active promotion of its satellite service.

Satellite TV operators Tricolor TV and Orion Express grew their respective bases at a slower rate than previously, according to TMT Consulting.

The overall cable TV base meanwhile declined year-on-year by 150,000 according to the research group.

According to TMT Consulting, about 71% of pay TV customers across Russia now take digital services, up three percentage points year-on-year.

ARPU growth was driven by increased prices and the growing dominance of larger players with bigger, more expensive packages.

The research group predicted that the number of pay TV subscribers will grow by only 1.8% this year to 43.5 million, with revenue growth slowing to 6% and likely to reach about RUB90 billion by the end of the year.